The Hand of God

YOU ARE MY SON; TODAY I HAVE BECOME YOUR FATHER.

Metin Mintaz is pastor of a church in Uskudar an area in Istanbul, Turkey. His desire is to see the Turkish people come to know our Heavenly Father, and to boldly live for Him so that others may see and believe.

Between 1970 and 1980, Turkey was in complete political chaos. Like everyone else, I too participated in politics and in those days there were only two extremes: you either had to be a conservative or a liberal. It was impossible to be outside of politics. If you claimed independency, you would be stopped by someone who would demand whether you were conservative or liberal. If you were on the side of the questioner – no problem! But if you were on the opposing side, you couldn’t escape without getting beaten up. 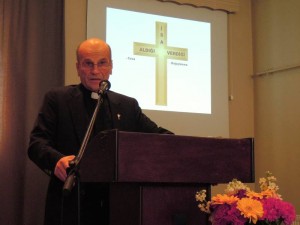 In 1980 there was a military rebellion and Turkey entered a brand new phase. There was an increase in fundamentalist Islam, but I, who was an atheist, became more strongly attached to my atheism. Religious issues were talked about everywhere and I would enter into the debates to prove that there was no God.

At that time, I began to read the Quran in order to better prove that there was no God, but was unable to finish it as it bored and frustrated me. If God was the God explained in the Quran, I couldn’t believe. Even though I claimed to live as an atheist, I actually thought that a God must exist. There were many times when, while experiencing difficulties, I would say that I wished there was a God so that I could take shelter in Him as I would in a father. But if God did exist He would have shown Himself to me in my struggles.

THERE WERE MANY TIMES WHEN, WHILE EXPERIENCING DIFFICULTIES, I WOULD SAY THAT I WISHED THERE WAS A GOD SO THAT I COULD TAKE SHELTER IN HIM AS I WOULD IN A FATHER.

I remember very well a night in 1990, during a time of depression for me, when I rebelled at the God I thought must exist and argued with him. “What kind of God are you? Even as a mere human I am willing to sacrifice my life for my children. I consider them the most important beings in my life. However, you are God and supposedly you created me, but you show no interest in us. Do you only look after the dead? I need you now!”

I took the New Testament and went home, where I began to read it. At first I was bored; it read like a story. But as I read, it was as if God began to speak to me. I remembered the night I had rebelled against God and fought with Him. God was responding to my accusations through the words of the New Testament.

“For God so loved the world that He gave His one and only Son.” When I read these words it was as if God patted my back with the compassion of a father and as if I heard Him say, “Metin, you never had to give your life for your children, but I sacrificed my only Son for you.” That moment I felt Him caress me with the compassion of a father. I fell to my knees and repented, saying, “All right God, You seem to love me more than I love my own children. But I had no knowledge of your incomparable love. Now I want to claim the right to be your child.”

I FELL TO MY KNEES AND REPENTED, SAYING, “ALL RIGHT GOD, YOU SEEM TO LOVE ME MORE THAN I LOVE MY OWN CHILDREN”.

From that day on my life took a 180-degree turn. Now I felt God’s hand in every part of my life like the hand of a compassionate father. Whatever the situation I’m in, these words from the New Testament give me confidence: “You are my son, and today I have become your Father.” In 1991 I was baptised and since 1998 I have worked as a leader in this church.

Before reading the New Testament I had researched the Quran but I did not find God there in any shape or form. What I was looking for was not a belief but a personal relationship with God. Was that possible? I learned through my experience with Christ that this is true. I wanted to feel Him in every area of my life. To feel him close beside me like a true friend is something beyond faith, for He says I am not His slave but His friend. It is a great mercy to be the friend of God.

My wife believed one year later and was baptised that year. I also have a daughter and a son; they also are believers. Praise be to God!

PRAYER: THANK YOU LORD FOR ADOPTING ME AS YOUR CHILD TO BECOME AN HEIR TO YOUR WONDERFUL KINGDOM. LET THIS REALITY NEVER FADE FOR ME. AMEN.

from the book, Tenacious: Proof in your hands that God never lets go of us
Copyright © Transform Europe Now 2013
www.transformeuropenow.org